Paint of this Planet 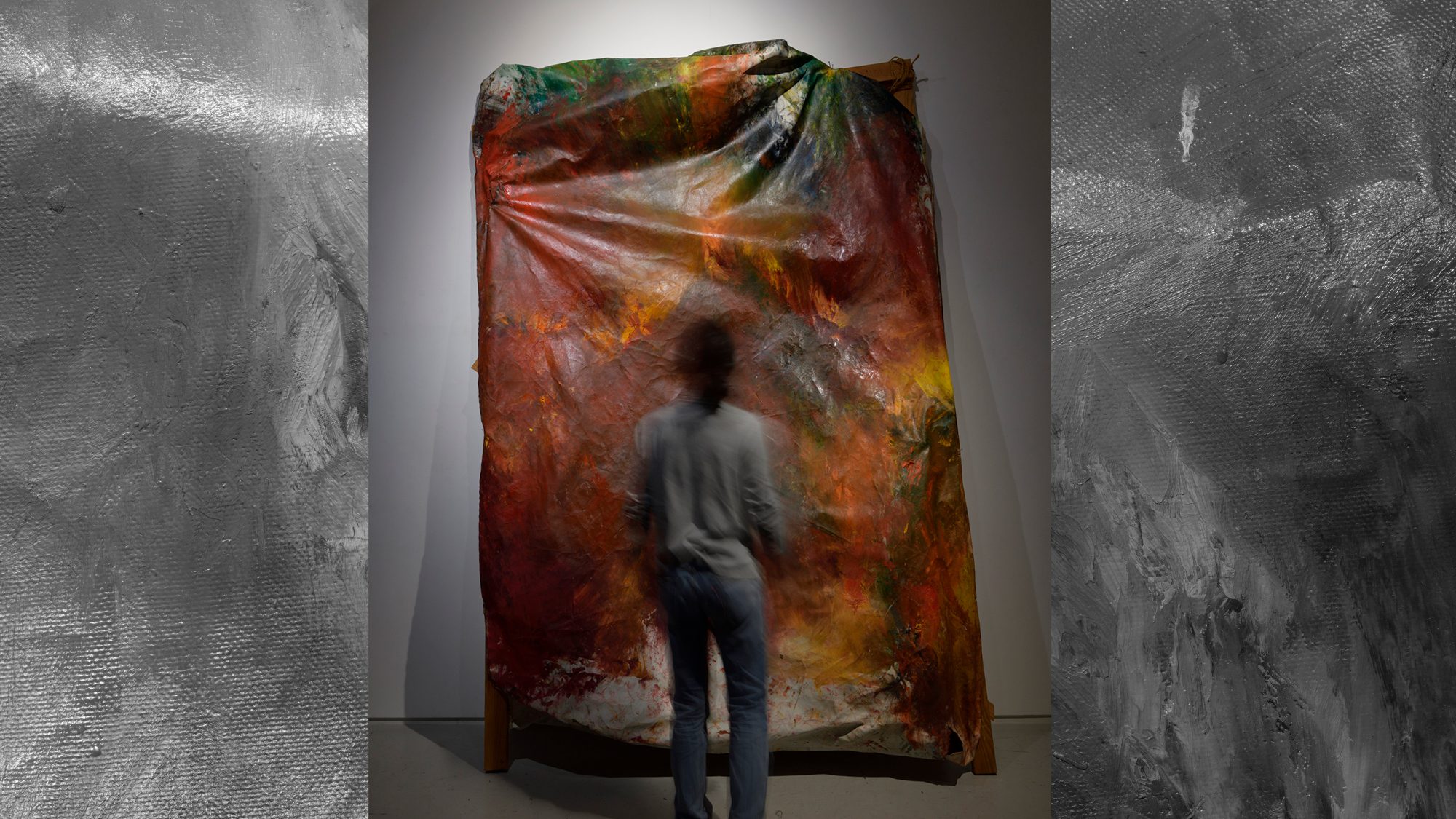 Paint of this Planet — Duifhuisstraat 52, the second volume of the autobiographical novel trilogy written by Masato Kobayashi, was published in October, 2020. In the first volume of the trilogy, released in 2018, Masato Kobayashi's fateful encounter with "Sensei" (a high school teacher who later became Kobayashi's muse/spring of inspiration) leads him into the world of painting in this inspirational story during which the artist matures through his painting. In the second volume, the author leaves his studio in Japan and embarks on a dazzling pictorial adventure. The year is 1996, and in this volume, considered a masterpiece, the author’s youth is illustrated as he travels around the international art scene and establishes his original painting style in which he is stretching canvas and painting simultaneously.

On this occasion, ShugoArts presents a part of Kobayashi's theory of painting from the novel, as well as a special movie of his large-scale works Unnamed #6 and Unnamed #10, which were created in Ghent in 1998 but many have not had a chance to see them in Japan.


I invited you… Do you understand, Masato? I didn’t invite you because of what you have done. I invited you for what you are about to do. 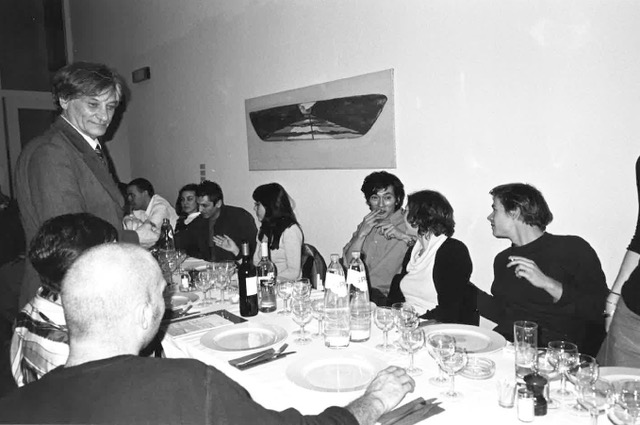 Invited by the legendary Belgian curator Jan Hoet, Masato Kobayashi landed in Ghent, where he was met by other artists who were also invited by Jan to create works. Kobayashi was also introduced to the members of Team Jan, who were running around preparing for the opening of the Museum of Contemporary Art (S.M.A.K.), which was to be built on the site of a former casino. These artists along with the members of Team Jan involved the citizens of Ghent and drew Kobayashi into a vivid and ongoing vortex of art.

Alas, what is it to be alive and paint!? 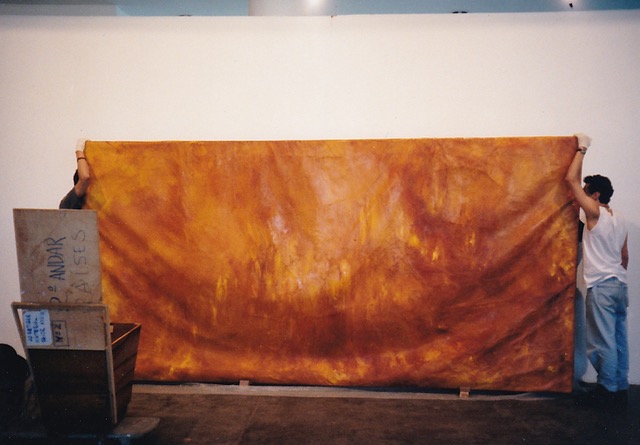 Invited to the São Paulo Art Biennial, Masato Kobayashi encountered various artworks in both tangible and intangible forms. He decided to explore his own painting methodology for this world, believing in the potential of painting, which had been considered outdated at that time.。

“Art is interesting if you know how the artist thinks, but if you don’t, you don’t understand anything! Thoughts, ideas, and concepts. They seem fast but they are slower than you think, and if speed is important, reality and science are much faster! Painting may not be a medium that fits the speed of today’s world, but the same paintings continue to live on, showing new faces depending on when and where they are shown. The way people look at a painting can change. In fact, what is the right way to look at it? Its standard of evaluation can also change. What is the standard? It’s not about speed, anyway.”

“Jan Hoet said that no one knows what art is. What we can do is to keep asking. …In a bookstore in New York, I was browsing through an English dictionary and I looked at the word ‘art’; it said, ‘Making or expression of what is beautiful.’ Doing something beautiful…”

Leaning a piece of lumber against the wall — this was the beginning of my new paintings. 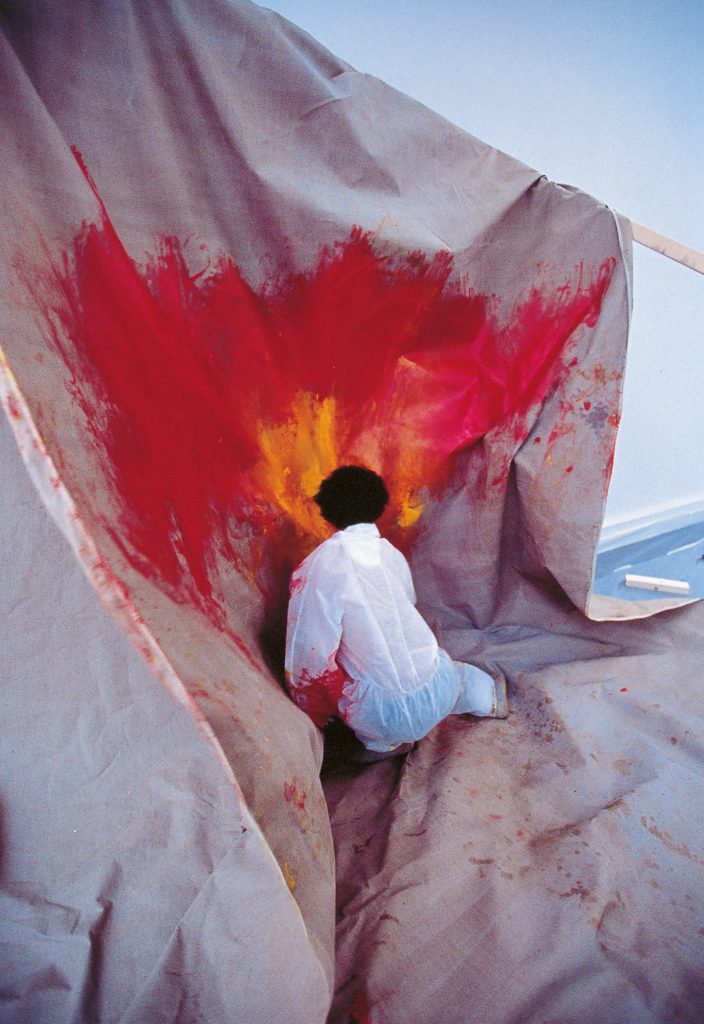 “This canvas can’t stand on its own without the wooden frame, and this frame will fall down immediately without the canvas. The moment I put the paint on the canvas is when the structure is most likely to fall over. Of course the structure will move and change. But once the paint is applied, it becomes stronger. Having “three” elements makes it stronger… ‘You paint as if you supported your own painting!’ said Philip in a voice that sounded like it was a sudden discovery. ‘Masato, I feel like the way you make your painting creates a structure in which the wood, canvas and paint support each other.’”

“As I worked with my hands, I felt that there was no middle ground between the three things: paint, canvas, and wooden frame. I’m just a medium… or maybe I should say I disappear for the sake of the painting. That might be a little too cool… It’s like a painting in which its structure is its image at the same time… like its spirit is also its body!” 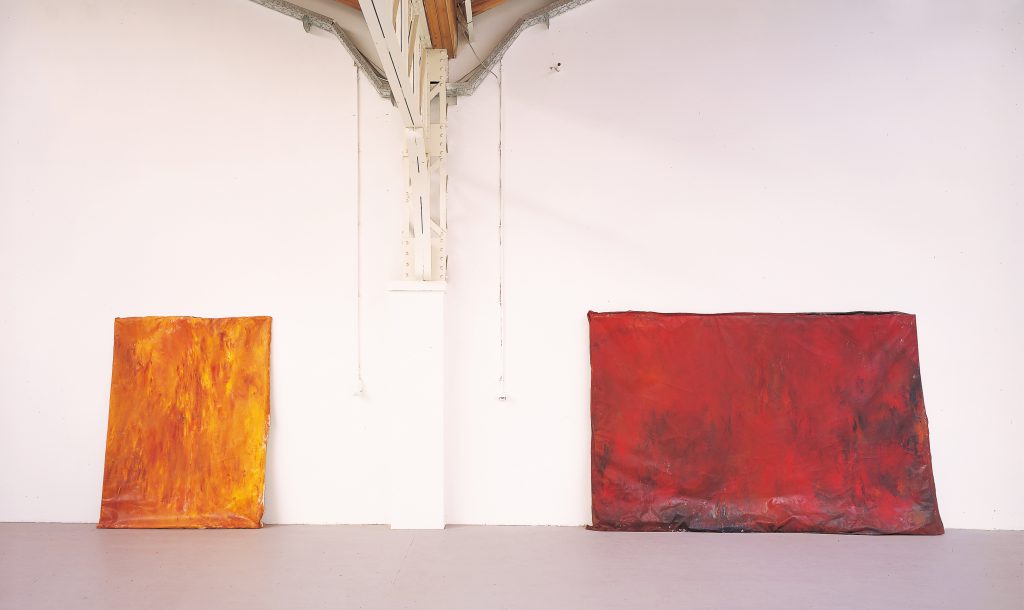 “With his thunderous voice, two workers rushed over to hold the painting and put it down on the floor. It was like stop motion. The painting was now on the floor. ‘Yes! Stay. Right there. See, they’re already great as they are. … What do you think? Masato, do you agree?’ At this moment, something became clear to me. A painting on the floor.
‘You don’t have to hang the paintings on the wall!’ I hadn’t even thought of that! The way the two paintings were leaning against the wall twenty meters away was the way I had always dreamed of (maybe). The paintings are not decorated, they are not displayed, they are left as they are, ‘paintings leaning against the wall.’ They are paintings that clearly have a frontal nature, but they look like they are unnameable. ‘They are the sons of painting!’ I thought. The unnamable paintings… It was the first time when my method and the way a painting should exist came together.”

I guess going to Ghent meant painting outside! 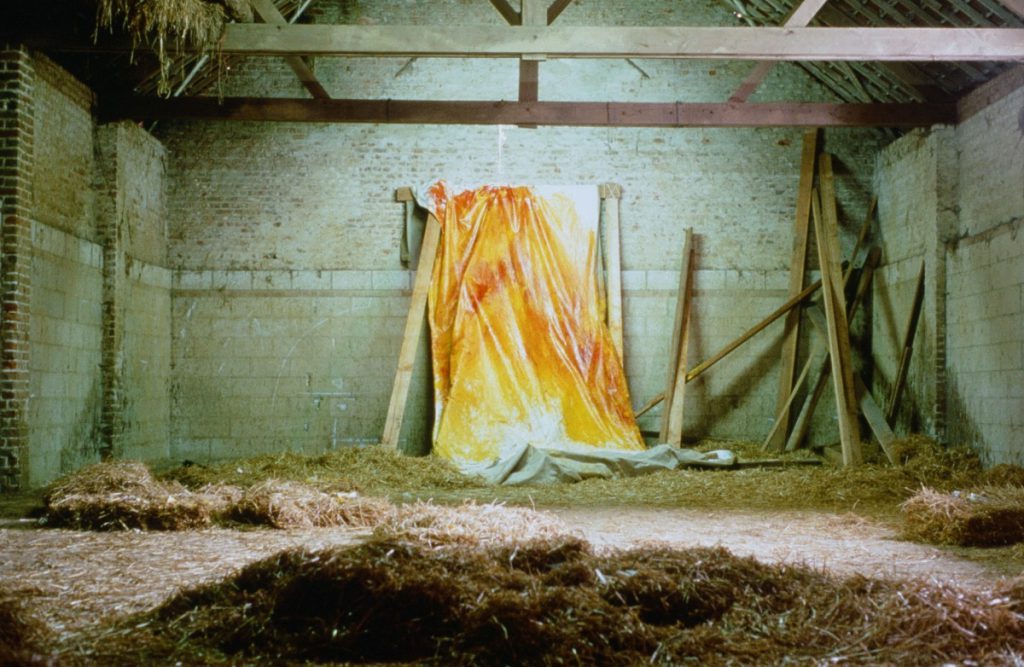 Light is an important element in all art. The light in Flanders had a great influence on the evolution of Kobayashi’s work.

“Light changes colors. It changes the paints on my palms, the way I use my fingers to mix colors, the way my hands move, and the way my body feels. Sunlight changes the tone of my voice, changes the way I interact with my painting. I felt myself becoming a little more gentle with the reflected light. Up until then, I disliked the playful reflections that were dancing across different things. For example, I hated the reflections on the folds of clothes and dresses, or on windowpanes and glasses. I didn’t like the effect of light on surfaces. ‘I guess going to Ghent meant painting outside!’ Outside was filled with all kinds of light. Reflected light: bouncing light, sunlight hitting the ground, the pond, and people. It bounces back like a ping pong ball; it’s all a dialogue.”

Let’s make a painting of the planet with the paint of this planet! 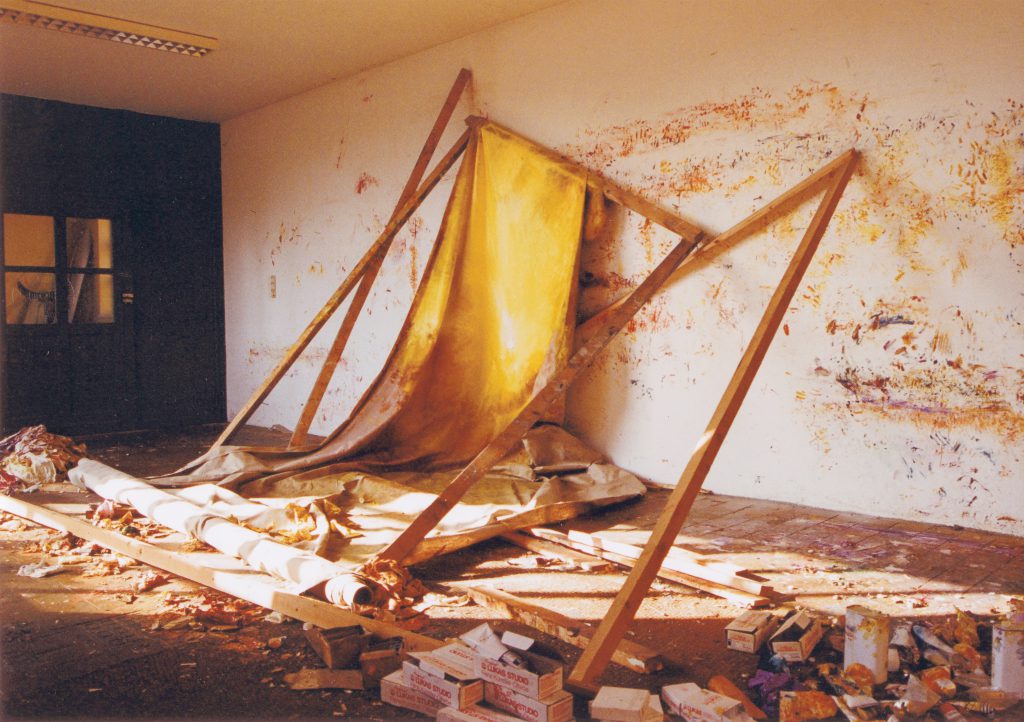 Masato Kobayashi went on to create one large work of art after another. Sometimes they became so massive that they could not be taken out of the studio. The space and the work became one, and furthermore, they were connected to the world around them… Where was the frame of the painting?

“When I was at my studio in Kunitachi, there was only a white wall around Painting=Sky. When I hung A Son of Painting, the space around the painting was only a little larger than the painting itself. When I came to Ghent and my painting was placed on the floor, the space around the painting suddenly expanded. On the wall, on the floor, on the ceiling, the painting that received the light came alive! That space was real. The world was alive and moving, and the light was something I had never known before. It didn’t matter if the space was good or bad, it was so raw and fascinating that I walked right into it together with my painting, without any means of protection. My painting was exposed to its surroundings as it should be. That’s what I wanted. I thought it was great.”

“I suddenly thought to myself, ‘Maybe it’s this planet.’ The moment I thought about it, my painting moved. Not only the inside of the painting, but also the air moved. The floor, the walls, the doors, the entrance to the bedroom, everything! The scenery looked different from a minute ago. What could be different? The way I compartmentalized my painting became screwed up. It didn’t matter where my painting starts and ends, I thought. This is “this planet.” …The irreplaceability of the present moment, the sense of a once-in-a-lifetime encounter, no matter how much farther or closer I looked at it, it was still ‘this planet.’ It didn’t matter where it ended. At the same time, everything became possible. This brightness, this is not philosophy. Not religion, of course. It was just a matter of turning my senses on.” 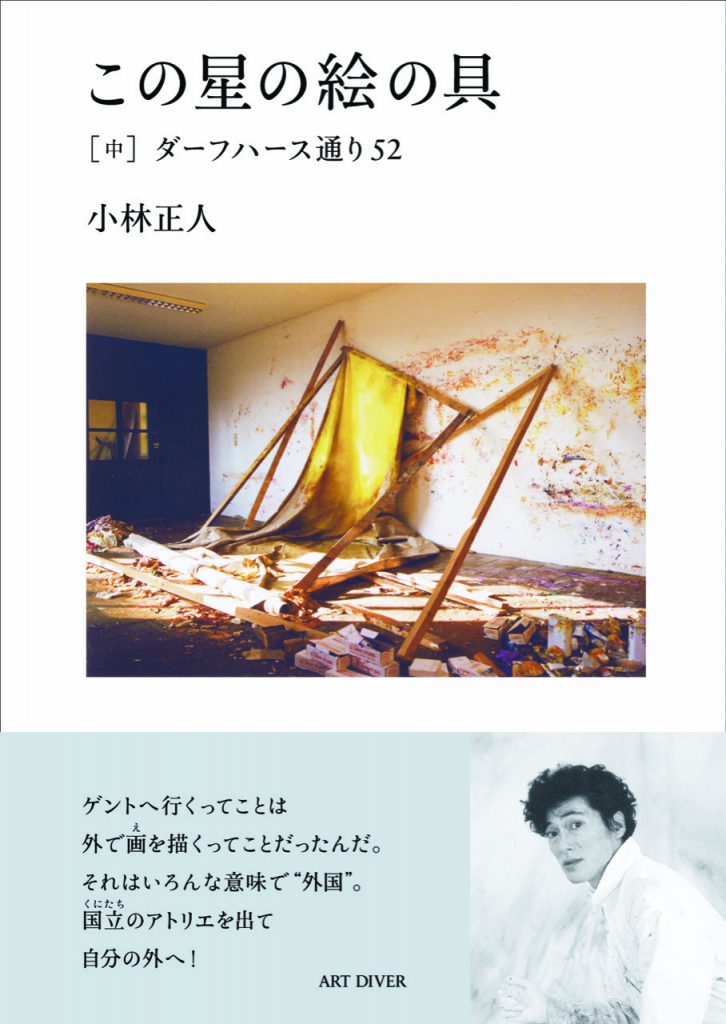 The book is available at major bookstores nationwide, online bookstores, and ShugoArts. For more information about the book, please contact us on the following address: info@shugoarts.com