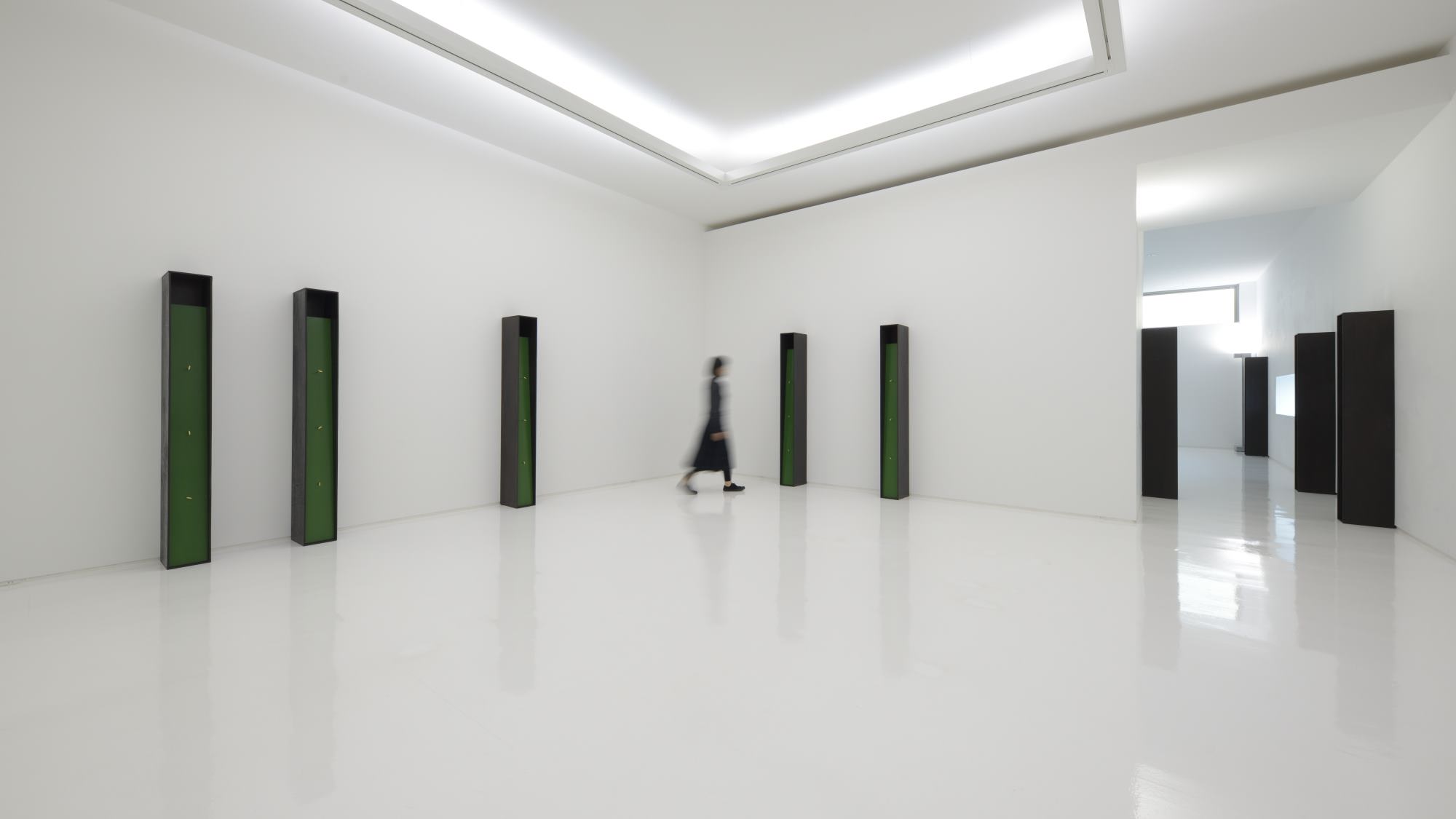 
Yukio Fujimoto, born in Nagoya in 1950, is a Kansai-based, internationally active artist who participated in the 2001 and 2007 Venice Biennale (the first time in the Japan Pavilion). In 2007, Fujimoto also held solo exhibitions at the National Museum of Art, Osaka, the Otani Memorial Art Museum, Nishinomiya, and the Museum of Modern Art, Wakayama.

Having spent the ʼ70s in music studios, Fujimoto is an artist from outside traditional artistic expression. Using “sound and things” as his point of departure, Fujimoto created numerous unique works that aroused the senses of hearing, sight, smell, and touch.

As a child, Fujimotoʼs toys were the cameras, film projectors, and reel-to-reel tape recorders ‒ state-of-the-art machinery in the ʼ50s and ʼ60s ‒ that his father no longer used at home. The experience of cutting and splicing sounds on tape and recording noise from the radio as an extension of play led Fujimoto to enroll in an electronic music course at Osaka University of Arts. The school included a room that was entirely fitted out with speakers ‒ a rarity at the time. As music began shifting from analogue to digital, Fujimoto came to feel that “all of the sounds emitted from the speakers were the same,” so he left the studio. When he returned home, he discovered a toy music box. Along with the refreshing surprise of switching from making big sounds to listening to small ones, Fujimoto realized that sound was a reverberating space ‒ something that would exert a tremendous influence on his later work. During this period, he ventured into the world of Marcel Duchamp, who he had unknowingly been influenced by as a child, and ultimately reviewed and revised his views of John Cage.

In 1990, Fujimoto created EARS WITH CHAIR, a listening device that captured invisible presences and vibrations in a space. Transforming the shape of the userʼs ears with two long pipes and amplifying ambient sounds that would normally go unnoticed, the work consisted of mass-produced readymade objects such as music boxes and pipes. At the same time, it contained an approach that can be found throughout Fujimotoʼs art: allowing each viewer to use a new means of perception to experience an external world that can be discovered through the work. 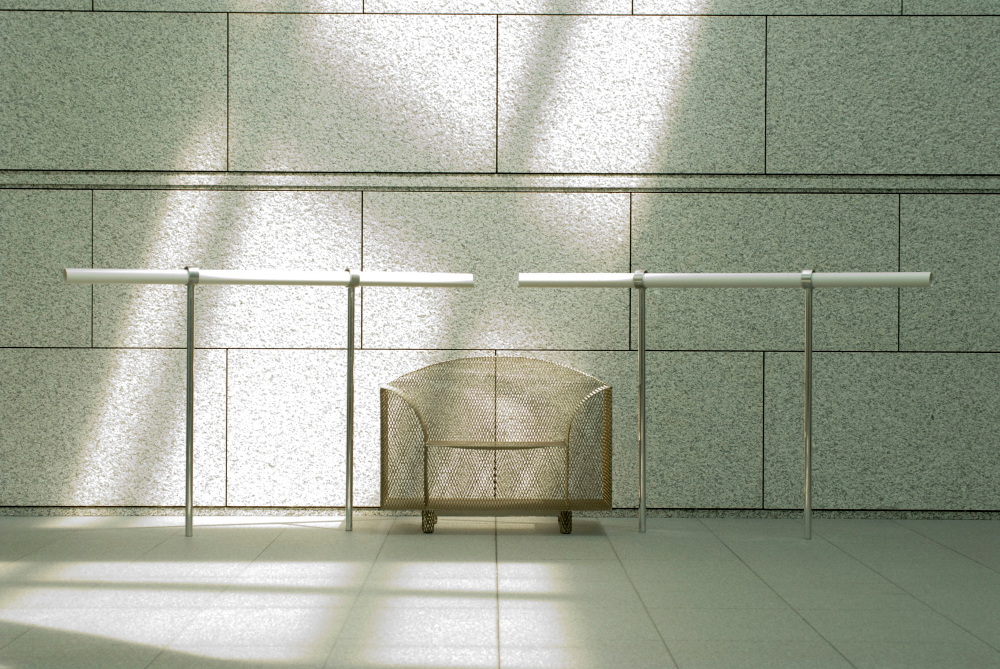 THE MUSIC is a work based on Schönbergʼs 12-tone technique that Fujimoto began in 2011. It is realized when the viewer plays the 36 music boxes, affixed to four acrylic panels, that make use of elements such as inverted, backward, and randomized sounds that were created with an iPhone app. 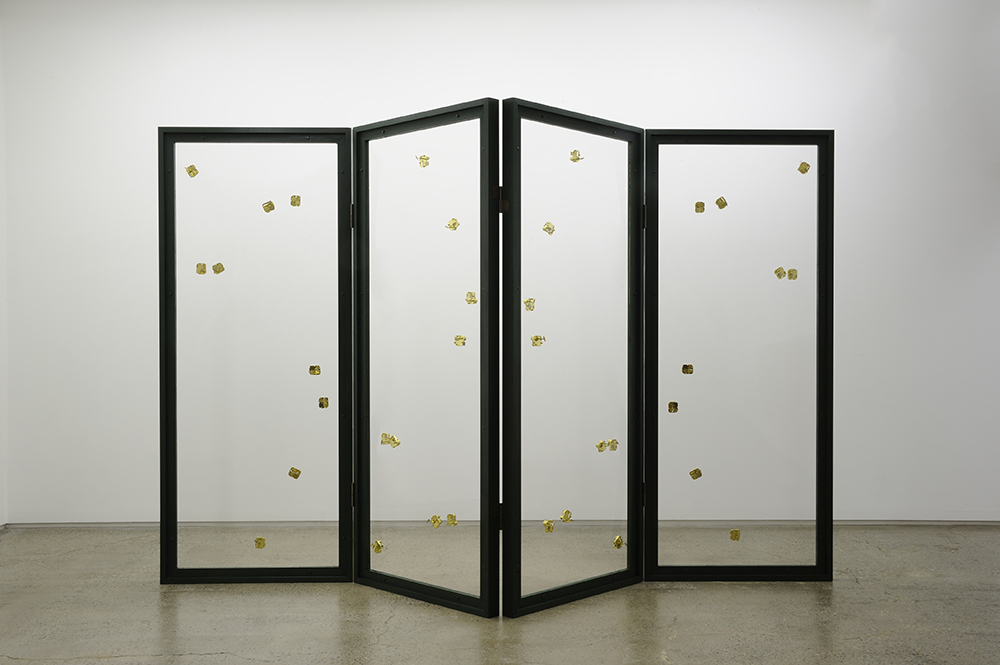 The installation Broom (Coal), shown at ShugoArts Weekend Gallery in 2016, met with an enthusiastic reception. Viewers became performers as they walked on top of a huge record covered with coal. 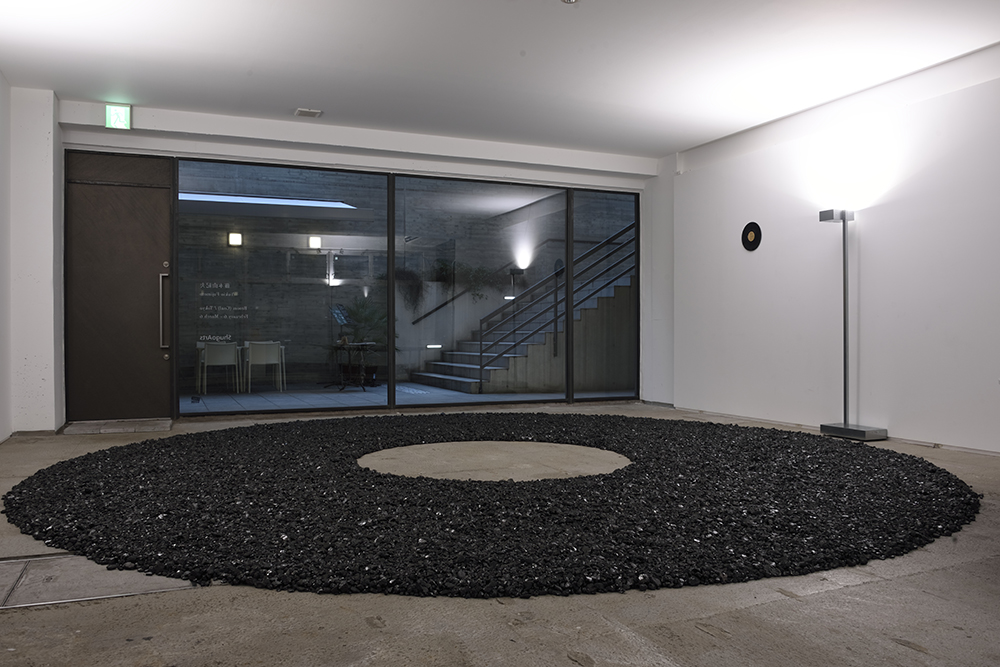 In this exhibition, we present STARS (1990), one of Fujimotoʼs most important works, made up of 54 music boxes that each play a single note, in the new ShugoArts space. The title is based on the visual perceptions of those who created stories about the constellations, a linked group of individual stars floating in the night sky. The work indicates the potential of human hearing as we reorganize each randomly emitted sound to make a chord in our heads and feel compelled to find patterns and melodies. Perhaps we are the ones who generate and manifest the world. We hope that you will take advantage of this special opportunity to experience Yukio Fujimotoʼs work in Tokyo in this exhibition, which also features a new piece by the artist.

STARS
Stars, with the sky as their canvas, each have regulated movements. Yet, all together in the sky, they appear to be nothing more than a random collection of points. To understand the clock-like mechanism of the sky, the ancients connected distinctive stars to other stars and committed them to memory by creating concrete shapes. In other words, the constellations don’t exist in the sky, they are images that were “created” with the stars that were visible to people.
I created “Stars” with the intention of allowing listeners to make sound patterns (music) by connecting sounds together from sounds that dot the sky.
0ne music box sound corresponds to each star. Each of the 54 music boxes emit only a sing1e sound. Each of the music boxes emit sound in regulated manner, but when all of them reverberate in a space, they become a collection of random sounds. As we linger in this sound space, without realizing it we are creating distinctive phrases by connecting sounds together in the same way that the constellations were created. The sounds we commit to memory are arranged on a time axis and perceived as fragments of melody. At the same time, these sound patterns are forms made by lines that link pieces of the sky together. In the space, an experience of time occurs simultaneously with an experience of space. It all depends on the listenerʼs ears.